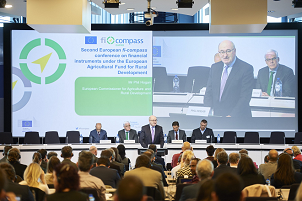 A new EU financing initiative for Europe's rural economy was launched in November at the 'Second EU fi-compass conference on EAFRD financial instruments for agriculture and rural development in 2014-2020'. This new initiative is aiming to combine finance from the Member States' Rural Development Programme funds (EAFRD) and the European Fund for Strategic Investment (EFSI), the core of the Juncker Commission's Investment Plan for Europe.

Improving access to such finance for farmers and rural entrepreneurs was a central theme of the flagship fi-compass EAFRD conference in Brussels, which was attended by nearly 250 delegates from all over the EU including Deputy Ministers of agriculture, senior officials from Ministries and heads of Member State managing authorities, farmer representatives, bankers, experts from the European Investment Bank (EIB) and European Investment Fund (EIF), as well as participants from other EU Institutions, notably the European Parliament and other stakeholders.

Opening the conference, Commissioner Phil Hogan, responsible for Agriculture & Rural Development, stated: "I am extremely pleased to see the progress that our managing authorities have made with financial instruments and the promising examples in Estonia, France, Germany, Italy and Romania. The new EAFRD – EFSI Initiative, which I launched today with the EIF and the EIB (fi-compass), is a great new opportunity that offers excellent possibilities for attracting private capital. I am ready to throw my full support behind all Member States willing to open the financial world to their farmers and rural businesses, and I call on them to quickly get their financial instruments on the market."

European Commission's Vice-President Katainen reinforced this message at the conference saying: "EFSI financing is available to support and already supports agricultural SMEs and economically and technically viable projects in the agri-food sectors. This new Financial Instruments vehicle is a welcome step towards using more financial instruments on the agri-food sector - we are on the right track for more jobs and growth."

The first pilot projects under this new initiative for investment in EU rural areas are encouraged to get started before the end of 2016. Results are intended to create substantial leverage and economic gains for EU farmers and rural economies by attracting significant volumes of private capital to further support a modernising and improving CAP and EU agriculture. Design, targeted areas and scope of the support will be instrumental in the delivery of the expected impacts, which may reach an impact level of 60% higher than the currently implemented options. The adoption of the Omnibus regulation proposed by the European Commission in September 2016 will be another critical element for the success of the Initiative, as it will provide the legal base for the move.

The Initiative will start involving up to five pilot cases of interested Member States, and will be expanded further in 2017 in case of growing demand. Countries with regionalised programmes will have to group resources and align approaches for ensuring a sufficient critical volume. In terms of geographical coverage, the aim is to expand the areas already covered by EAFRD financial instruments ensuring a balanced approach and support options for EU farmers across the Union. At the same time, the combined instrument may be specifically targeted to reflect on the specific food and farming situation in local areas. Interested Member States may already signal their intention to the European Commission and the EIB Group.

The Initiative will run through two different, but interlinked phases:

Experts from all sides, including Member States, would get involved in both phases of the Initiative, which will be implemented in the course of 2017-2018.

The new EAFRD – EFSI Initiative is now becoming also a central point for discussion and development for the EIB Group. Pim van Ballekom, Vice-President of the EIB, commented: “EFSI has already allowed EIB to provide stronger support to the sector, and the impact of the new phase of EFSI on European agriculture and rural areas will allow us to do even more. Combined with our other lending activities in the sector, the intention of combining EFSI with the EAFRD resources represents a powerful additional tool to achieve an even greater level of risk taking, potentially leveraging significant additional private sector resources for even more economically sustainable investment on the ground.”

EIF Chief Executive Pier Luigi Gilibert added: “The EIF is very pleased to be leading the development and implementation of financial instruments in the key agricultural sector in partnership with DG AGRI and EIB. This new initiative builds upon our existing experience of financing this sector and our long-term role in helping managing authorities to make value-adding financial instruments a reality for their markets. The new possibilities [foreseen in the Omnibus proposal] of combining EAFRD and EFSI in this initiative could be a breakthrough moment for the sector.”

For further information see the fi-compass conference webpage, which contains links to video coverage of all the conference announcements and presentations, including a useful mix of new case study material from Estonia, Denmark, France, Germany and Ireland.