Rural development loans, guarantees and equity under the spotlight in Estonia 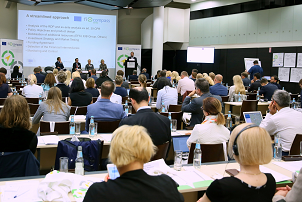 Estonia, currently holding the Presidency of the Council of the EU, hosted our sixth EAFRD conference on financial instruments for agriculture and rural businesses, supported by the European Agricultural Fund for Rural Development (EAFRD). In total, 85 participants from 17 different Member States attended the conference on 12 July 2017 in Tallinn. These included representatives from EAFRD managing authorities, rural development organisations, paying agencies, farm unions, and financial bodies who received information about the state of play with EAFRD financial instruments, as well as insights from farm and forestry practitioners that have benefitted from them.

New possibilities for enhancing EAFRD financial instruments through the European Fund for Strategic Investments (EFSI) were also outlined, in line with the announced Initiative by Commissioner Hogan and the EIB Group's Presidency at the annual EAFRD conference in Brussels last year.

Josefine , Director of the European Commission's DG Agriculture and Rural Development (DG AGRI), opened the conference in Estonia alongside other keynote speakers such as Marko Gorban, Deputy Secretary General for Agricultural and Rural Life Policies at the Ministry of Rural Affairs, representing the Estonia's Presidency of the Council of the EU, and speakers from the European Investment Bank Group. Ms emphasised the opportunities that EAFRD financial instruments offer for Member States and regions. She noted that: "they create the possibility to attract private financing and they give the possibility of access to finance for projects and organisations that otherwise would not have been able to borrow resources. These instruments improve and enlarge the possibility of financing for rural development."

Ms continued: "We would like Member States and regions to make more use of these instruments. In the future, we will probably have more budgetary constraints to face and we will have limited financial resources to respond to the requirements. At the same time, after 2020, we will have more needs for the agricultural sector to innovate and modernise in order to become more competitive, but also to deliver environmental and climate change objectives. All this makes the case of financial instruments extremely relevant."

Speaking about the types of rural development actions where EAFRD financial instruments can be particularly useful, DG AGRI's Director highlighted: "investments to modernise and innovate the farming area, the farms themselves, but also processing and marketing as an important field of investment. Then of course we have a need in rural areas for infrastructure support, for forestry support, and for small villages. So we have broad fields which we would like to bring to the attention of the Member States and managing authorities, and where we think that Member States should make a step now in order to prepare for the policy and for the future."

Participants at the conference were shown case study examples displaying how EAFRD financial instruments are already working in practice. These included the experience from the Estonian loan fund for agriculture and rural development which triggered interesting discussions between participants.

Madis Reinup, from Estonia's Rural Development Foundation (the EAFRD loan scheme's financial intermediary), provided a positive perspective on their loan fund's future saying that: "financial instruments are easier to use for entrepreneurs, that is clear. Of course, they are not, in a sense, a one hundred percent alternative to grants because they work differently, but I think in general, for the economy, it’s easier and more efficient to use financial instruments. The main advantage actually is that it is much more flexible, there is less bureaucracy, and in the long term your investment is more efficient because you have to think through your business investment as you have to pay it back. That is the main difference to grants and that is very important in the long term."

Other favourable insights from EAFRD financial instruments were also presented during the conference, and managing authorities were encouraged to continue using the targeted coaching service to help launch more loans, guarantees, and equity investments for Europe's rural economy.

See the conference's webpage for a detailed review of all the information provided during the  sixth  conference on financial instruments under the EAFRD. Video recordings of the conference's 20 different presentations (and associated discussions) as well as the graphic recording of the conference are all available on the website for viewing, downloading, and sharing.