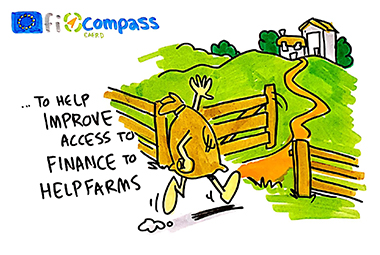 Financial instruments have become an integral part of the European Agricultural Fund for Rural Development (EAFRD) tool box over the last few years. Recently, their importance has further increased with demand for financing from farmers growing significantly, as shown by the fact that 95% of the financing package for agriculture and bioeconomy announced by the European Investment Bank (EIB) and the European Commission in April 2019 had been committed within six months.

Agriculture is a key sector for the economy in Greece, contributing 4.1% of total gross value added and 14% of employment (compared to an EU average of 1.2% and 5%, respectively). In early September 2019, the European Investment Fund (EIF) signed a funding agreement for the management of EUR 80 million of (RDP) resources expected to catalyse a loan portfolio of up to EUR 400 million to be made available for Greek farmers and agri-SMEs active in the key segments of production and transformation of farm products. Greek authorities expect this instrument to have also a significant impact towards the expansion and modernisation of the sector.

The mandate will be part of ‘EAFRD-EFSI Initiative’, launched in 2016 by Commissioner Hogan, a tailor-made approach enabling the EIF to combine EAFRD resources with funding from the European Fund for Strategic Investments (EFSI), thereby increasing the impact of the mandate by improving the volumes of resources available to agricultural producers.

This is a new mandate for the EIF that adds to a number of mandates in the agri-sector across Europe, which, after the initial pilot in Languedoc-Roussillon launched in 2015, now encompass other French regions (Nouvelle-Aquitaine), Italy, Portugal, and Romania.

Alter’NA, the EAFRD financial instrument that was launched in November 2018 in Nouvelle-Aquitaine (France) to help more than 2 000 farmers and agri-businesses to access credit financing at better terms, has reached an agreement as of October 2019 with three financial intermediaries: Banque Populaire, Crédit Agricole and Crédit Mutuel-CIC. The implementation of the financial instrument was supported by the upstream intervention of fi-compass and ongoing downstream support (via training sessions and dedicated web-based tools to final recipients) is being provided by the EIB advisory services to increase the potential absorption of financial instrument.

In Croatia, three new EAFRD financial instruments are picking up pace. The first one, an EAFRD microfinance instrument has been under implementation for a year now with HAMAG-BICRO – the Croatian Agency for SMEs, Innovation and Investment. In total 411 loan applications were accepted for a total amount of EUR 16.9 million (with average loan size ca. EUR 40 000). All funds for small loans (EUR 25 000 to EUR 50 000) have been disbursed – and HAMAG-BICRO is in negotiations for additional allocations.

The second financial instrument is an EAFRD guarantee instrument, under implementation for a half year now, also with HAMAG-BICRO in cooperation with financial partners (commercial banks and leasing companies). So far, EUR 1.5 million EAFRD guarantees have been committed for commercial loans.

At the same time, HBOR, the Croatian Bank for Reconstruction and Development, together with three commercial banks signed an agreement in early September 2019 for the implementation of a financial instrument for a HRK 500 million (around EUR 67 million) investment loan in rural development. When it comes to financing the global agricultural sector, more than 1 700 projects have received support since 2014 for more than HRK 5 billion (around EUR 672 million).

In Portugal, the Managing Authority of the RDP of Mainland Portugal (excluding the Islands) has given a mandate to the EIF to manage a new financial instrument. The instrument uses EUR 20.05 million of EAFRD to leverage an additional EUR 15 million of EFSI resources to set up a guarantee instrument to support farmers (in particular young farmers) and agri-business with a leveraged financing (total loan portfolio) of approximately EUR 300 million. The guarantee agreements with the financial intermediaries are expected to be signed early next year after which the financial instrument shall become operational.

What next for EAFRD financial instruments?

The next EAFRD conference on financial instruments will take place in Brussels in April 2020. The event will focus on the market gaps for agriculture and agro-food industry, and the financial environment in which farmers in the EU operate. More information can be found on the dedicated webpage.

DG AGRI and EIB (fi-compass) launched a new model under the targeted coaching focusing on the 2021-2027 set up, design and implementation of financial instruments.  EAFRD managing authorities interested in the coaching should send a request to DG AGRI asking for the service.